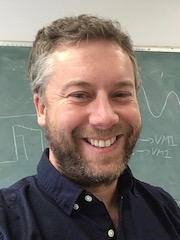 My research is experimental and focuses on precision measurements using laser-cooled and trapped atoms. More specifically, I have been working at the National Research Council Canada (NRC) to develop an atomic clock that uses trapped caesium atoms to measure the SI second as accurately as possible. This work utilizes a broad range of skills including optics, atomic physics, electronics, and computer programming.

Precision timekeeping has relevance in many scientific fields including studies of fundamental physics through searches for variations in fundamental constants, the proposed use of atomic clocks to detect dark matter or gravity waves, or to increase the precision in positioning available through global navigation satellite systems such as GPS. Also, in a society relying on an ever-increasing degree of automation and synchronization, precise timekeeping is key to many tasks such as precise timestamping for high-speed financial trading, the synchronization of electrical grids, or the design and implementation of “smart cities”.

At the NRC, I have worked to build a caesium fountain clock which can measure the SI second to approximately two parts in 10^16 and can participate in the steering of Universal Coordinated Time. This level of precision corresponds to the clock not gaining or losing a second in more than a hundred million years. I also work on the development of femtosecond frequency combs which can be used to bridge the ~6 orders of magnitude in frequency between radio frequency sources and optical clocks. This allows for comparisons between microwave and optical frequency standards.