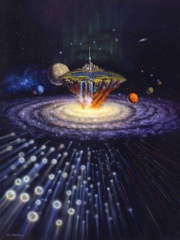 Artist Ron Dollekamp of Scarborough, Ontario created the stunning depiction of the universe shown here which creatively mixes elements of space and time to describe the research in physics and astronomy undertaken by faculty and students at York University. Click on the image to view a version with higher resolution.
The centrepiece of the painting is a fragment of the Earth upon which the Toronto skyline and Lake Ontario are seated. The CN Tower and SkyDome are clearly visible. Further emphasizing the Canadian connection, the northern lights hang over the skyline, with the Big Dipper shining through. The Moon and several other planets form a pleasing arc around Toronto, and a blue nebula of interstellar space hangs nearby. The fragment of Earth is seen growing out of the Milky Way galaxy of which it is a constituent. Hurtling towards the galaxy are rays of light, our probe of the universe at large, and a cascade of fundamental particles of nature out of which all matter is composed. The immense scale of the universe is emphasized by the display of another more distant galaxy in the background.
The painting not only rivets attention from afar, but many fine details attract closer scrutiny. Even the second "star" in the handle of the Big Dipper is accurately shown to be double. All six fields of research in which York University researchers engage are represented:

Astronomy and Astrophysics are represented by the galaxies and their linkages to the particles out of which they formed and to the stars and planets which formed within them. A flow of water out of Lake Ontario connects us to the Milky Way. It depicts the cycle of galactic evolution, which is characterized by a continual exchange of matter between star systems and the interstellar medium. The conversion to steam emphasizes the inexorable march of the universe towards a maximal state of randomness.

Atomic, Molecular, and Optical physics are represented not only by the stream of particles, which is a mixture of protons and electrons, but also by the northern lights, which are a manifestation of collisions between particles in the solar wind with atoms and molecules in the upper atmosphere. The swath of light rays hurtling into the galaxy further illustrates research in this field.

Another focus, Biological Physics, is amplified by the views of the landscape around Toronto and by the incoming streams of particles and light, which are tools used to probe how living things function.

The essence of High Energy and Particle Physics is covered by depicting the protons in a manner consistent with the quark model of the atomic nucleus; three "colours" of quarks are confined inside bubbles in such a way that their distinctiveness is most obvious in the centres, but fades away toward the boundaries, as quark confinement models demand.

Planetary Physics
On a macroscopic scale, the northern lights signify research into Planetary Physics, as their emissions provide a valuable probe of the nature of the upper atmosphere and the interactions of charged particles with the Earth's magnetic field. Planetary Physics is also signified by he Earth's crust and molten core shown below the city of Toronto and the Moon and planets around us.